Aidan smiled that slow, sexy smile of his just before he lifted his gun and fired. The glass shattered, and the. . .

A shrill beeping sound pulled Julia out of the story. Startled, she jumped. Her initial thought was that she’d put on the teapot and had forgotten to turn off the burner. She blinked and opened her eyes. She’d been trying to get deeper into her character’s point of view by typing with her eyes closed. It hadn’t worked as well as she’d hoped. But it had ensured that she didn’t see the smoke . . . Smoke! There was smoke filling her living room. Again.

The annoying voice on the smoke detector bleated fire, fire.

Frantically searching under the papers littering her desk for her cell phone, she ignored the voice. Though she was impressed. It was amazing how real Adrian sounded. Like he was right outside . . . Wait a minute. He was calling her name, not Gillian’s. Crap, it was Aidan. Double crap, she knew why he was here. She’d thought she’d have until morning to face him.

“Hang on! I—” She heard a loud bang at the same time she found her phone. “I’m coming!” she called, running to the outside entry door as she punched in the assigned number for the alarm company.

At the same time she realized there was no dial tone, Aidan kicked in her door. It bounced off the wall and the hulking shadow of a man filled the open doorway. If she hadn’t recognized his voice, she’d be terrified. Given the intimidating expression on his face, she wondered if maybe she should still be afraid.

Fire, the smoke detector bleated again. Right, fire, smoke. “Hurry, I need your phone!” She made grabby motions with her fingers.

He looked at her like she’d lost it and strode into the room. “Your alarm is connected to the station. They’ll be on their way. Where’s the fire? Do you have an extinguisher?”

“No, no, I don’t need the fire department. I need your phone.” She rushed forward. He didn’t seem to understand the urgency of the situation, and she began patting him down.

He reached in his pocket, punching in a code before handing her his phone. Of course his would be password protected.

“Thanks,” she said to his back as he prowled around her apartment, no doubt looking for the source of the smoke. “Um, I think my nachos are on fire.”

She made a face at his muttered, “You have got to be shitting me.” And then went to look up the alarm company’s number on her phone, only to realize she couldn’t access it because her cell was dead. “Duck.”

Aidan strode from the kitchen wearing her burned oven mitt and carrying a charbroiled tray of smoking ash. “It’s usually on the unit,” he said dryly before heading out the door.

Which went to prove that the man didn’t miss a thing, even her half-whispered conversation with herself.

At the return of his heavy footsteps, she turned her back to her desk, attempting to use her body as a shield. Widening her stance and her arms, she wrapped her fingers around the edge of the desk and leaned back in hopes of concealing any evidence of her book from his all-seeing cop’s eyes.

He glanced at her and then did a double take. She thought she heard a muttered, “Jesus,” before he retrieved his phone from her hand and continued across the living room, dodging a basket of laundry, a box of decorations she’d yet to put up on the tree, and a half-eaten bowl of cereal.

Wondering what was with the double take, she looked around. She didn’t see anything out of the ordinary. Sure her place was a little messy, but he was a guy. He probably wouldn’t even notice. She thought of something he might notice and looked down.

Yep, that was probably the reason for the look. It was obvious she was cold, and her body-hugging black T-shirt read “Santa’s Favorite Ho” with the jolly old elf ho, ho, hoing, paired with black-and-white plaid flannel sleep pants.

When Aidan reached the other side of the living room, he placed the cell phone between his shoulder and ear and raised the window. “Yeah, it’s Aidan Gallagher. The call from 232 Main Street is a false alarm. That’s her. Five times, is that so? I’ll tell her, thanks.”

“It wasn’t five false alarms. It was four.” She faced her desk to quickly bury a paperback copy of Warrior’s Kiss and her contract for Warrior’s Touch under some paper and turn her notepad upside down while doing a visual search for any other incriminating evidence.

“Doesn’t matter. You still broke the record for false alarms in a six-week timeframe. Dispatch says Mrs. Rosenbloom had three.”

“Are they charging me?”

“No” He answered his ringing phone and then bowed his head. “Hello, Dad. Yes, she’s fine. Is that right? Nachos. No, smoke’s not too bad. Okay, I’ll do that. Don’t remind me,” he grumbled and then disconnected.

Whatever his dad said to Aidan didn’t improve his already not-so-happy mood. She really didn’t feel like talking about the suggestion she’d made to Harper and why. Fending off his probing questions would be difficult, and she wasn’t exactly equipped to handle him tonight. She was tired, and her throat had passed sore an hour before.

“I really appreciate you dropping by, but it’s late, and I have an early day.” She forced a smile and moved to see him . . . out her broken door. She barely managed to stifle an anguished moan. She couldn’t face the thought of dealing with repairing the door tonight.

He lifted his chin to the left of the kitchen. “Is that your bedroom?”

She ignored her inner hussy who yelled who needs a bed and suggested Julia throw herself on the floor at his feet. Her inner hussy was way more optimistic about their chances of getting lucky tonight.

“Yes, but I don’t see . . . What do you think you’re doing?” she said as he walked over and opened her bedroom door. Umm, more like shoved it open. The clothes that had been hanging over her door this morning had fallen off when she closed it, and she’d been running late.

“I’m not going anywhere until you tell me what you said to Harper and why. You’re tired? Fine, you can talk to me from your bed while I fix your door.” He looked around her bedroom. “If we can find your bed.”

She grabbed a pink lacy bra off the doorknob and held it behind her back. “I’ve been busy. I haven’t had time to tidy up.”

“Very funny. I’m sure your room isn’t any better.”

“Sugarplum, my bedroom didn’t look this bad when I was a kid.”

She kind of liked that he called her sugarplum but could do without the sarcasm. She scooted past him to scoop up her bras and panties and any other embarrassing items that were lying on the floor . . . and on the bed . . . and on her dresser. And half sticking out of her nightstand drawer! As breezily as she could, she moved to the front of the nightstand in hopes of blocking his view. “It’s a little smoky in here. Maybe you should open that window too?”

She smiled. He sighed.

Aidan looked from the fish bowl to her and started to laugh, a deep rumbly sound that she would have enjoyed if it wasn’t at her expense and if . . . “It’s not funny! My fish are drowning. Save them!” 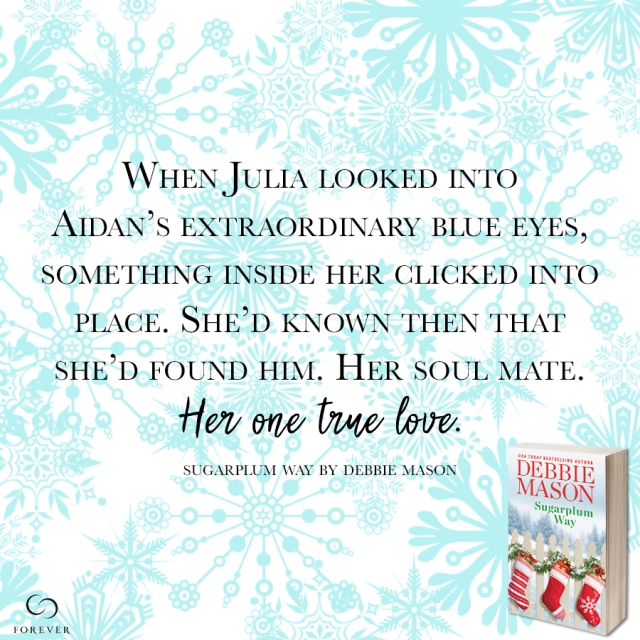 Part of the Harmony Harbor series

Romance writer Julia Landon knows how to write a happily-ever-after. Creating one for herself is a whole different story. But after a surprising–and surprisingly passionate–kiss under the mistletoe at Harmony Harbor’s holiday party last year, Julia thought she might have finally found her very own chance at true love. Until she learns her Mr. Tall, Dark, and Broodingly Handsome has sworn off relationships. Well, if she can’t have him in real life, Julia knows just how to get the next best thing….

Aidan’s only priority is to be the best single dad ever. And this year, he plans to make the holidays magical for his little girl, Ella Rose. But visions of stolen kisses under the mistletoe keep dancing in his head, and when he finds out Julia has written him into her latest novel, he can’t help imagining the possibilities of a future together. Little does he know, though, Julia has been keeping a secret that threatens all their dreams. Luckily, ’tis the season for a little Christmas magic.

About the author: Debbie Mason is the USA Today bestselling author of the Christmas, Colorado and Harmony Harbor series. Her books have been praised for their “likable characters, clever dialogue and juicy plots” (RT Book Reviews). When she isn’t writing or reading, Debbie enjoys spending time with her very own real-life hero, three wonderful children, two adorable grandbabies, and a yappy Yorkie named Bella in Ontario, Canada.