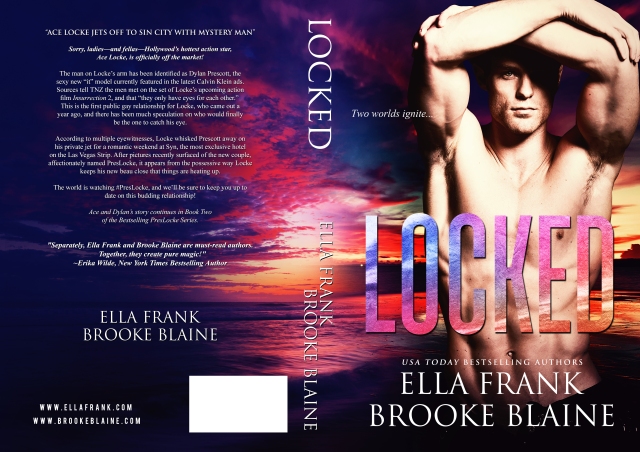 “ACE LOCKE JETS OFF TO SIN CITY WITH MYSTERY MAN”

The man on Locke’s arm has been identified as Dylan Prescott, the sexy new “it” model currently featured in the latest Calvin Klein ads. Sources tell TNZ the men met on the set of Locke’s upcoming action film Insurrection 2, and that “they only have eyes for each other.”

This is the first public gay relationship for Locke, who came out a year ago, and there has been much speculation on who would finally be the one to catch his eye.

According to multiple eyewitnesses, Locke whisked Prescott away on his private jet for a romantic weekend at Syn, the most exclusive hotel on the Las Vegas Strip. After pictures recently surfaced of the new couple, affectionately named PresLocke, it appears from the possessive way Locke keeps his new beau close that things are heating up.

The world is watching #PresLocke, and we’ll be sure to keep you up to date on this budding relationship!

Ace and Dylan’s story continues in Book Two of the Bestselling PresLocke Series.

“You’re looking pretty serious over there, Daydream.” There was humor in his tone, but it didn’t quite reach his eyes. “You okay?”

I nodded slowly as I made my way over to where he sat. I reached for the phone and put it on the table, and when I cupped the side of his face and lowered my lips to his, I said, “I’m just great.”

Ace pulled away slightly and raised an eyebrow. “Great, huh?”

“Mhmm. I was just thinking…”

“Always a dangerous pastime,” Ace said, and brought a palm up to lay it directly over my heart, and I wondered if he could feel it thudding.

“Nope. I was just thinking how wonderful you are.”

“I’m serious,” I said, bringing my other hand up so I was cradling his face between my palms. “I wish for one day you could be me, so you could see what an incredibly brave, sweet, extraordinary human being you are. You have so much, Ace, yet…you’re more generous and humble than anyone I know.”

“Shh,” I whispered against his lips. “I just wanted you to know that I…” I caught myself at the last minute as his eyes pierced mine and I was paralyzed by the enormity of emotions flooding me.

God, how is it that in twelve weeks this man has completely turned my world upside down? But he had. Ace had me wanting things…things I’d never even thought about before. Things I always assumed I would never want.

“You…?” he said, but my mind had changed course. The emotions had blurred and morphed into something else entirely, and then, quite unexpectedly, I asked, “Do you want kids?”

From the stunned expression on Ace’s face, I might as well have asked him if he were a serial killer. His eyes had widened and his mouth fell open, and he looked so bewildered I couldn’t stop the chuckle that bubbled out of me.

He appeared so shell-shocked it made me laugh even harder. “I’m sorry…but you should see your face right now… I promise, I’m not pregnant.” When I began laughing again, Ace’s mouth snapped shut and he brought both his hands up to my wrists to encircle them and tug me down into the booth with him. He scooted across the seat until he was lounging back against the wall and I was awkwardly sprawled across him.

“Excuse me if you took me a little bit off guard,” he said.

“Okay, a whole fucking lot. But that wasn’t where I thought you were going with that at all.”

I aimed a grin his way, trying to play down the fact that I’d been about three seconds away from handing over more of me than I knew I could ever get back should Ace decide he didn’t—

It was Ace’s turn to chuckle. “What is up with you? You’re all over the place.”

I sighed, knowing that he was right. Maybe it was like a postproduction crash or something. But I felt oddly sentimental. Like all of my feelings were right there on the surface.

I stroked my fingers down his cheek. “I just think you would be an amazing father, is all. And I was curious.”

He narrowed his eyes on me. “I don’t think that’s it at all, but to answer your question. Yes, I think one day and”—his eyes were so intent on holding mine then that there was no way I could look anywhere but at him, and his meaning was crystal clear before he even said it—“with the right person, I would definitely consider having kids. What about you?”

“I never really thought I would, considering where I came from and all. But…” I chewed on my lower lip, suddenly wishing I’d kept my damn mouth shut.

My eyes locked with his and I decided it was now or never to really just lay it out there. “But watching you today on set made me think about what-ifs.”

The grin that curved Ace’s mouth then was cheeky, and for the first time since we’d entered the trailer, his eyes lit with the same amusement his smile was conveying.

It was my turn for my jaw to drop then, and when Ace started laughing his ass off I punched him in the arm. “Dick.”

“Aww, but you just said I was wonderful.”

“But not magical enough to get you pregnant.”

“Would you stop saying that. You’re freaking me out.”

Ace’s rumble of laughter vibrated through him as he wrapped his arms around my waist, and finally, after a minute or two, when his mirth had subsided, he stroked a hand down my back to my ass and pulled me as close as was possible while wearing clothes.

“It’s okay to look at the future and think about what might be, Daydream.”

I laid my head against his shoulder and shut my eyes. “I know. This is all just happening so fast. Sometimes I have to pinch myself to believe it’s real.”

I felt his lips at my temple and then he whispered, “It’s real. So believe it. Plan it. Trust it.”

I nodded and then angled my face to see him look up at me. He had a soft smile on his face, and for the first time all day he looked relaxed, and I knew that as long as we were together the future looked brighter than ever.

Ella Frank is the USA Today Bestselling author of the Temptation series, including Try, Take, and Trust. Her Exquisite series has been praised as “scorching hot!” and “enticingly sexy!”

You could say Brooke Blaine was a book-a-holic from the time she knew how to read; she used to tell her mother that curling up with one at 4 a.m. before elementary school was her ‘quiet time.’ Not much has changed except for the espresso I.V. pump she now carries around and the size of her onesie pajamas.

Brooke is a USA Today Bestselling Author and enjoys writing sassy contemporary romance, whether in the form of comedy, suspense, or erotica. The latter has scarred her conservative Southern family for life, bless their hearts.

If you’d like to get in touch with her, she’s easy to find – just keep an ear out for the Rick Astley ringtone that’s dominated her cell phone for years.

You can connect with Brooke here:

If you’d like to be the FIRST to know about a new release, sale, giveaway, or upcoming signings & events, make sure to join Brooke’s newsletter: http://eepurl.com/brxPkP