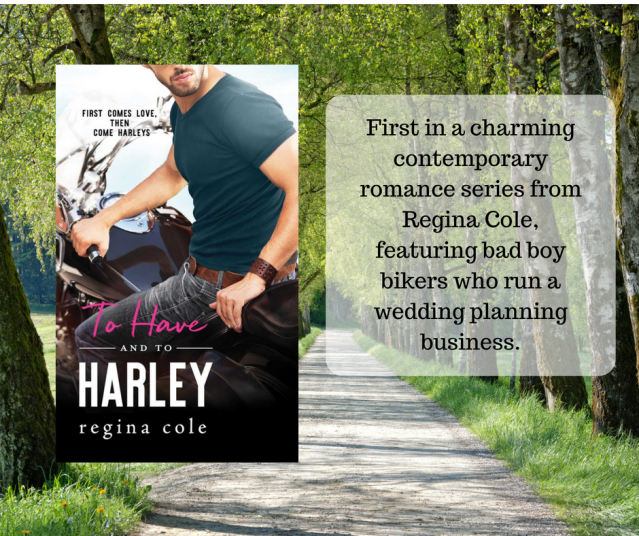 You may now kiss the biker

Bethany Jernigan owes her bestie. Big time. So when wedding planning overburdens the bride-to-be, Bethany steps in to handle the nitty-gritty. But the guy in charge isn’t anything like she imagined. He’s gruff, tattooed, and 100% male. His staff is even rougher around the edges, and it’s not long before she feels as if she’s stepped into some kind of crazy alternate reality.

Are those…bikers? Arguing about wedding favors?

Trey Harding never wanted this to get so out of hand. One little lie somehow snowballed into a world of dresses and flowers and food and holy-hell-he’s-in-over-his-head. But it’s not like he can confess he’s not the wedding planner he’s pretending to be—especially now that he’s falling for the maid of honor! His charade is becoming a farce, and as engines rev and ribbons fly, Trey’s running out of time to figure out how to tell the truth without losing his new family, his crew…or the woman of his dreams.

Regina Cole, lover of manly muscled arms, chest hair, and mini-marshmallows, has been reading romance since her early teens. When she’s not frantically pounding away at the keyboard, she can be found fishing with her family, snuggling with her hubby and tiny twin boys, or slinging mud in her magical home pottery studio. She lives outside Raleigh, North Carolina.

I took a chance on Regina Cole’s To Have and to Harley because it intrigued me; bikers turned wedding planners, I had to see where it went. I am SO, SO, glad I did. I loved the interaction and the odd match-up. Things turn a little dark in the middle and there were times that I wanted to slap both the hero and heroine. However, things came around to where I wanted them to by the end, so much so that I hope all 12 of the Shadows get their own book. Bikers turned wedding planners is fabulous and creative and wonderful.

He was in way over his head.

Mrs. Yelverton was a freaking saint. All his life he’d been imagining her as an evil, heartless, empty stranger who had abandoned him, and now? Now?

How could he tell her what he’d turned into?

“I, well, I’m in charge of a kind of group.” He paused to clear his throat, his hand rubbing the back of his neck to clear the tensing of the muscles there. “Yeah.”

He coughed, then took a sip of coffee. “Yeah, you could call it that.”

“What kind of business are you in?”

Her stare was too clear, too honest, much too direct. He was struck by a feeling he hadn’t been expecting. Somehow, someway, he was afraid of disappointing her.

Well, if that wasn’t a kick in the teeth.

There wasn’t a way around it. Was there?

Desperate, he looked around the kitchen while he took another long sip of coffee.

What to say? Because the truth—the shakedowns, the Robin Hood–style robberies, the bodyguarding—none of it was exactly on the up and up. There were definite legal and moral gray areas to what he did. And while he had no problem with it personally, he didn’t want to run the risk of disappointing her.

Who was he turning into?

Desperate, his gaze flew about the kitchen.

“Well, we do a little…” Hell, she’d never believe he cooked. Something else. Quick, you dumbass. Keep it vague. Stall. “A little organizing, you might say.”

She nodded, an interested look on her face inviting him to continue. Ah, dammit.

Keep looking. A container of herbs sat on the windowsill above the sink. Gardening? Screw that. He scanned the rest of the kitchen. Nothing. No ideas whatsoever.

“What kind of events do you organize?”

He rested his elbow on the tabletop, knocking a magazine to the floor.

“Whoops. Sorry.” He bent down to get it.

A woman in a beautiful white gown was spread across the back of the magazine. The tagline for a bridal boutique advertisement read We help you tie the knot in style.

“Not a problem. So, you were saying?”

His mind was blank. Totally, completely blank. His mouth opened, but nothing came out.

Mrs. Yelverton furrowed her brow in obvious concern. “Are you okay?”

He had to say something. He looked down in desperation. The magazine was still there, facedown beside him, the laughing woman in the white gown like an angel of salvation.

“Weddings,” he blurted out as he straightened in his seat. “We organize weddings.”

“Weddings. Wow, I hadn’t expected that.”

He coughed. “Yeah, me either.”

Mrs. Yelverton laughed. “I can imagine. How did you get into it?”

Wanting nothing more than to jump up and leave the county at a dead run, Trey shrugged, trying to play it off. “I got a chance to do some, enjoyed it, made my own business.”

His hand was lying atop the magazine beside him, his knuckles lining up with the ad copy perfectly. He read the words out together.

Those words should have made him feel amazing. Instead, he felt like a scum-sucking bastard for lying to her.

Just then, the door behind her opened, and Trey’s chest went vise-tight, his heart clambering against his ribs in triple time.

She was long, lean, with bone-straight blond hair and elfin features complementing porcelain skin. Her blue eyes were a bit red, as if she’d been crying recently. But despite the obviously brimming emotion beneath the surface, she wore a bright smile. It was the kind of expression he’d adopted many times over the years. Pretending things were all right when everything had turned to ashes around him was the only option he’d had at times, and seeing the same kind of defense mechanism in her touched him in a way he wasn’t expecting. Physically, she was just his type, and the way she moved into the room, both cautious and confident—strong as hell despite whatever was trying to bring her down—sparked immediate interest and admiration in his gut.

“Oh, Bethy, I didn’t expect you until late this afternoon.” Mrs. Yelverton rose and pulled the girl into her arms.

A wave of nausea overtook Trey. Was this girl…Was she…

Well, so much for that short-lived spark of attraction.

“Hi,” the blond said, and Trey stood. She looked a little intimidated as he stood to his full height.

He’d been about to step toward her for the introduction, but he stopped. No need to make her more uncomfortable. But the idea that she found him scary was oddly disappointing.

“I’m Bethany Jernigan,” she said, sticking her hand out for him to shake.

“Trey Harding,” he said, gripping her much smaller hand in his, trying to ignore the softness of her skin, the faint tremble of her touch.

“Bethany, I hope you won’t mind keeping this quiet from Sarah for now. I haven’t had a chance to tell her about it. But this…” Mrs. Yelverton drew Trey’s arm through hers. “This is Samuel.”

Bethany gasped, her hand over her mouth, and Trey looked away. “Samuel? That Samuel?”

Trey hated this. He felt awkward, like a sideshow freak. His spine prickled, his feet nearly bouncing with the urge to get the hell out of there.

“Trey, Bethany has been part of our family for years now. She’s your sister Sarah’s best friend and lived with us until she went to college. Of course, she’s still got a room here. She’ll always be welcome to come back home.” Mrs. Yelverton’s smile was gentle as she looked at Bethany.

“Wait. So we’re not related?” Trey gestured between himself and Bethany.

Mrs. Yelverton laughed. “No, not by blood. But I hope you’ll be close.”

Something uncurled in his belly then, a knot of anxiety releasing as he looked at Bethany Jernigan—no relation—with new eyes.

“I hope so too,” he said. She blushed a little and glanced away.