Beyond the story blurb, what is WATCHING YOU all about?

I like to think of Watching You as a sort-of cross between a Cinderella story, Pretty Woman, and Psycho.

There’s definitely a Prince Charming-sweeps-the-normal-girl-off-her-feet element. Jessica Jensen is a Cinderella—a former foster kid and orphan who’s learned to take care of herself and takes no b.s.

But there’s also a dark, dangerous mystery enveloping the passionate relationships she gets caught up in with director Reece Winchester.

Somebody is stalking him—and she soon catches that someone’s eye. Things aren’t exactly what they seem, there are old family mysteries the Winchester brothers want to keep hidden that are being dragged out of the shadows and back into the light. There are murders, attacks, and high-stakes danger.

And, I think, there’s a really fun, solid, sexy romance between two exciting and unique people. 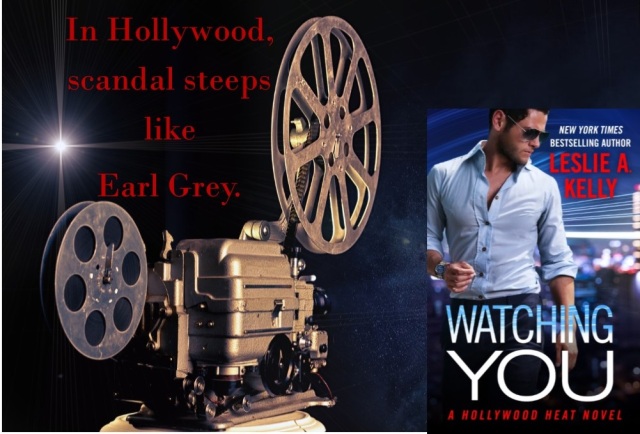 I am a longtime fan of Leslie Kelly’s books.  She writes snarky heroines with fun storylines and protective heroes that meet their match.  Her latest, Watching You, is classic Kelly with a few twists.  I like the Hollywood angle and she will definitely keep you guessing until the end.  I look forward to reading the rest of this series as there were definitely a few loose ends when the screen faded to black.

Please do not reproduce without permission from the author

“I’m wondering,” he said, lifting a hand and brushing his fingertips against her jaw, his thumb rubbing against her bottom lip. “Why did she disguise your beautiful face?”

Completely shocked, she couldn’t reply for a moment. Her jaw fell open, and she stared up at him, wondering how he could sound so certain. He wasn’t trying to tease the truth out of her, he sounded like he was absolutely sure she’d modeled for the piece, when in truth, there was no way he could know. She had no tattoos, no distinguishing marks, nothing made her body any different from any other woman’s. He had to be guessing.

But she knew he was not.

Liza wouldn’t. She just wouldn’t. But maybe she needed to show Sharon the model release forms, one of which Jess had signed. Might Reece have seen it?

“Nobody told me,” he said, sounding utterly truthful.

“Then how could you know?”

He raked a hot gaze down her body. “How could I not?”

He nodded. “The minute I saw the statue.”

She gulped. “No one else ever has.”

“No one else sees you as clearly as I do.”

Wow. Great line. Only, she didn’t think it was a line. He sounded totally serious.

“I’ll repeat the question,” he said. “Why the secrecy? Why did she hide your face?”

Licking her lips, Jess wished she had brought a drink with her. Her mouth was so dry, and it was so darned hot in here. Well, it wasn’t hot in the room, but the heat he put off was melting her like she was a Hershey bar left on a dashboard.

“She didn’t need my face.” Trying to lighten the moment, and cover her embarrassment, she forced a laugh and looked away. “Wanted only for my body. Story of my life.”

“Don’t do that,” he said, his tone forbidding. “Don’t mock yourself.” He took her chin in his hand and tilted her face up to look directly into her eyes. She quickly fell back into wild, hypnotic Reece-land where thought didn’t exist and there was only action and reaction, motion and emotion. “She wanted your face. Didn’t she.”

It wasn’t a question. And Jessica didn’t try to deny it.

“Why did you say no?” he asked, dropping his hand. She immediately missed its warmth, which was crazy since she’d just been mentally whining over how freaking hot it was in here.

“I guess I didn’t want the notoriety. I’m trying to be taken seriously as….” Realizing if she said she wanted to be a screenwriter he might assume she was about to go all Hollywood on him and launch into a script-pitch, she changed direction. “I mean, I work at a bar and already have to fend off grubby men with grabby hands. The last thing I’d want is for any of them to see that piece, recognize me, and decide to be more persistent with their attention.”

His jaw flexed, as if he was gritting his teeth, and the eyes narrowed. “They touch you?”

“Perils of working in a place called Hot Buns.” Seeing his confusion, she added dryly, “We don’t sell burgers, and we wear short shorts.”

He got it now, and the jaw tightening thing got worse. “Why?”

“Girl’s gotta eat.” She gestured toward the statue. “Look at those thighs, I’ve obviously gotta eat a lot.”

His eyes narrowed. “I told you not to do that anymore.”

She gulped. He was deadly serious, as if he had the right to give her orders. It was cave-man. It was unacceptable.

It was kind of hot.

“Self-deprecation doesn’t suit you. You have to know you’re beautiful.”

Good Lord. Reece Winchester was telling her she was beautiful? And he sounded like he really meant it? She knew she was sexy. She had assets and knew how to flaunt them. But nobody had ever called her beautiful.

Now Liza? Oh yeah. Her sister was soft, fragile. Any guy would look at her and think, “She’s so lovely.” Jess? They’d think, “I’d do her.”