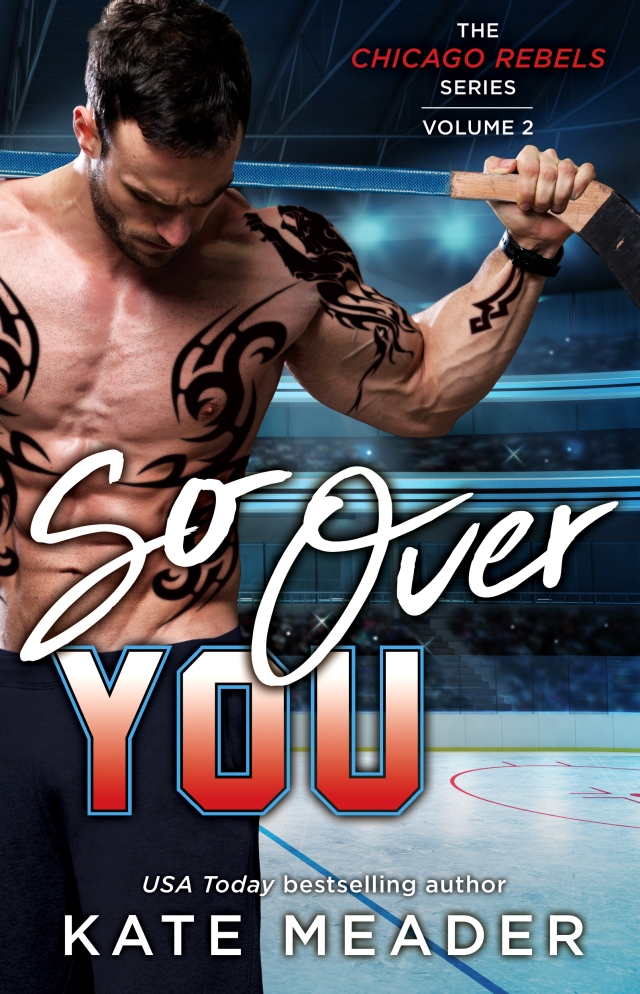 —Publishers Weekly (So Over You)

“Things heat up on the ice in Meaer’s latest installment of the Chicago Revels series (Irresistible You, 2017)…Isobel and Vadim’s chemistry is off the charts, and Meader’s engaging details of hockey and Chicago pull you further into their world. Even nonhockey fans will be rooting for the Rebels by the last page.”

—Booklist (So Over You)

“Hockey is a sport that moves a mile a minute, and it’s even more thrilling when the action off the ice has even more speed. In the second Chicago Rebels book, external conflicts make the path to a happy ending difficult for the couple, but that makes it even more satisfying in the end. Meader’s thought-provoking tale has well-rounded characters who touch each other’s lives — sometimes not too gently.”

—RT Book Reviews (So Over You)

“Meader’s strength is creating characters who live, breathe, and jump off the page; Remy and Harper shine, and the supporting cast of characters, including Harper’s half-sisters, is very strong. The mix of sexual tension and emotional decisions will lead Meader’s series launch to many a keeper shelf.”

“Meader takes her readers on a breathtaking, non-stop, glorious ride. The sex scenes are lyrically written with fresh, descriptive prose. Enough is included about hockey to add its fast rhythm to the book. Remy’s family is multi-faceted and fills the pages with joy. Readers will love the relationship between Remy and Harper, and will be excited for the next story — Isobel’s.”

—RT Book Reviews Four and  a Half Star TOP PICK (Irresistible You, Book 1)

Three estranged sisters struggle to sustain their late father’s failing hockey franchise in Kate Meader’s SO OVER YOU,Book 2 in the new sizzling Chicago Rebels series. Middle sister Isobel is at a crossroads in her personal and professional lives. But both are about to get a significant boost with the addition of a domineering Russian powerhouse to the Rebels…

Isobel Chase knows hockey. She played NCAA, won silver at the Games, and made it thirty-seven minutes into the new National Women’s Hockey League before an injury sidelined her dreams. Those who can’t, coach, and a position as a skating consultant to her late father’s hockey franchise, the Chicago Rebels, seems like a perfect fit. Until she’s assigned her first job: the man who skated into her heart as a teen and relieved her of her pesky virginity. These days, left-winger Vadim Petrov is known as the Czar of Pleasure, a magnet for puck bunnies and the tabloids alike. But back then…let’s just say his inability to sink the puck left Isobel frustratingly scoreless.

Vadim has a first name that means “ruler,” and it doesn’t stop at his birth certificate. He dominates on the ice, the practice rink, and in the backseat of a limo. But a knee injury has produced a bad year, and bad years in the NHL don’t go unrewarded. His penance? To be traded to a troubled team where his personal coach is Isobel Chase, the woman who drove him wild years ago when they were hormonal teens. But apparently the feeling was not entirely mutual.

That Vadim might have failed to give Isobel the pleasure that was her right is intolerable, and he plans to make it up to her—one bone-melting orgasm at a time. After all, no player can perfect his game without a helluva lot of practice…

Kate Meader was raised on romance. An Irish girl, she started with Catherine Cookson and Jilly Cooper novels, and spiced it up with some Mills & Boon. Now based in Chicago, she writes romances of her own, where sexy contemporary alpha heroes and strong heroines match each other quip for quip. When not immersed in tales of brooding mill owners, oversexed equestrians, and men who can rock an apron or a fire hose, Kate lives on the web atkatemeader.com.

Kate Meader will be giving away a $25 Amazon gift card during release week. To enter, please go here!

“So we are agreed. You are looking for nice.”

“Most everyone is, Vadim. No one wants a creep.”

He inclined his head until it almost touched hers. “The opposite of nice does not have to be a bad thing. Not when it comes to certain areas. Sex, for example.”

“You can never stray long from that subject, can you?”

“Men think of it often, yes. I am just a slave to my gender. My offer is still open, you know.”

Oxygen was at a premium. He was far too close. “What offer?”

“To apologize. With my cock.”

Oh, she got it now. There was no apology on the table. This was purely Vadim Petrov trying to prove he was top dog, the man who could make a woman’s panties drop with a smile and a wink.

“You raging dingus! You’re not interested in ‘my disappointment’ or in making up for that first terrible time. All you care about is that there are women living in this universe who didn’t go off into the stratosphere when your dick made its debut inside their vaginas.”

“Only one woman, Isobel.”

“You didn’t know back then. You just assumed tectonic plates shifted because, like all men, you imagine you’re the epicenter of the orgasm earthquake. As long as you feel the earth move, to hell with everyone else.”

Nothing but aristocratic hauteur from him now. “I am trying to be nice—”

“Nice? You just said you only recognize nice because you’re the opposite!”

He curled a hand around her neck, his touch shockingly sensual. “Then I shall be the opposite. I shall be very, very bad, Isobel.”

She wanted to say something about how “bad” wasn’t the opposite of “nice,” but this wasn’t an appropriate time for an English lesson. Her pulse stuttered, then gathered strength, a relentless pounding of yes, yes, yes. He must have heard it because, the next second, his lips crashed into hers, taking control as if it was his right.

But she knew better, didn’t she? She knew that Vadim Petrov was all smoke and mirrors, style without substance, a man whose only focus was his own pleasure.

Boy could he kiss, though.

This wasn’t your standard teenage fumbling. This was a man who knew exactly what do with his mouth. Probably all that practice over the years, she thought bitterly.

The bitterness melted in the face of a wildfire consuming her body. Pure, white-hot need. Maybe the owner of the lips didn’t matter. Maybe it was just a joining together of body parts that worked in this never-to-be-repeated moment.

He halted, his expression impossible to read in the shadows.

“It is bad, yes?” His breathing was labored.

She expected him to say something cutting, but he surprised her.

He did as he was told.

He didn’t taste like the boy she remembered. She thought she’d committed everything about that experience to her soul, both the bad and the good, yet Vadim’s mouth was different now. He was different.

Spicy and sweet, authoritative yet testing. It cracked open something. Not inhibition, because that had never been her problem, but reticence. With other men, she would hold back, waiting for the sparks to fly. If it didn’t ignite within a few seconds, she was already moving on, steeling herself for the disappointment that would come later.

Vadim’s kiss blew her wariness away. If it was this good, then the rest . . . No, that was not going to happen.

He was an employee, a coworker, a tabloid manwhore, sort of a dick, and the guy who took her virginity and did a piss-poor job about it. If none of these reasons were enough to put a halt to this nonsense, then she was in deep freakin’ doo-doo.

“Well?” he asked, though there was no missing the blink back to reality of his eyelids. He was just as affected as she.

“You want a score?” she panted. “Seven point four. The French judge marked you down. Too much tongue.”

This appeared to delight him, delight coming in the form of a lift at the corner of his decadent mouth. “It seems we both have lessons to learn. Again.”

In a flash, he had pulled her across into his lap—okay, she may have helped because this couldn’t not continue. Strangely, the snark fired her up. That hadn’t been their thing before, but maybe his time in North America had improved his personality.

She liked this version of Vadim. She liked it very much.

She also liked his positioning of her core over his erection. His hands kneading her ample ass to bring her closer was another check in the “like” column. And, additionally, helping her improved opinion of him was his mouth back on hers, sucking, testing, exploring.

“Again,” she sighed right back into his mouth.

Rubbing her center against him was divine.

His hands everywhere were divine.

That mouth . . . oh, God, that mouth was ten steps above divine.

And then that mouth was speaking Russian, rough, sexy, sweet nothings that drove her wild. Forced out all common sense. His mouth trailed her jaw, delivering little nips and hot licks to her neck.

She heard the scrape of her track jacket zipper, felt tingles as he applied openmouthed kisses to newly exposed skin. Her nipples were on fire, sensitive and needy. Can’t stand this. Going to die. She ripped her bra strap off her shoulder and freed one aching breast.

“Suck me,” she begged, and then his mouth closed over her tit and suckled hard. His moan on tasting her sounded like he was in pain, but she didn’t care; all she cared about was this mindless grasp at pleasure.

The insistent pulse thrumming through her body beat louder, stronger, showing no sign of stopping and heading for the one place she’d never visited with this man. She rolled her hips and hiked her suggestive rubs into a dirty grind. He was huge against her, toting this hard, hot instrument of pleasure that stroked her just right.

“Please,” she begged as she rode him harder. Faster. Dirtier.