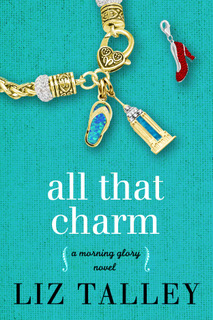 Hi, everyone, and thanks to Toni for letting me come give y’all a glimpse into my newest baby, uh, I mean book, All That Charm. It’s funny how our books really feel like our children. We create, nurture, mold, cut, paste, worry, cry a few tears and then…send them off into an unknown future.

This is really hitting home with me here lately as I have a senior about to graduate high school. My life has been an emotional rollercoaster of ups, down, twisty turns and the threat of vomit. LOL. Change has been in the air for me and I’m learning to embrace it.

All That Charm marks my very first splash into the indie world. I wrote the book with the plan to publish it with my current publisher, but with the publishing world as it is, fate handed me a new opportunity with Montlake Publishing and I had Eden’s book in my hands with nothing to do but publish it myself. I’ve learned so much about how talented, dedicated and slightly crazy you have to be to be an indie author. It’s tons of work but so fulfilling. Just days ago I got my final files from my freelance editor and the book cover from the designer. I had to put it all together like a quilt and upload it for readers to buy on May 2nd. It was thrilling and scary. But mostly thrilling. I hope you’ll take the opportunity to check out this new book in the Morning Glory series. I think you’ll love visiting New Orleans and watching Eden get her chance in the spotlight (literally). Time to fall in love with Eden, a fun speakeasy, Bourbon Street and a sexy single dad. Check out this excerpt which introduces you to Gatsby’s, the hottest spot on Bourbon Street:

Just as Eden moved toward the booth, a cab stopped and three laughing women in club clothes spilled out. They looked primed for a night on the town, and as soon as one paid the driver, they all three crowded into the phone booth and pulled the door closed. Eden couldn’t see what they were doing, but seconds later they disappeared.

It was serious Hogwarts stuff.

Looking left then right as if she were about to do something illegal, Eden walked to the booth. The metal edging was cold from the damp night and the glass squeaked as she pulled the door open and stepped inside.

“This is so weird,” she whispered to herself, nerves jangling as she lifted the receiver. Probably should have used some hand sanitizer or something. All those people lifting and dialing. She pressed the number and held her breath. Immediately to her left, a door slid open, elevator style.

Eden stepped inside and entered another world.

The alcove was much like a foyer in a fancy home. Except there was black-and-white honeycomb tile, a crystal chandelier, and a smartly dressed woman sitting behind a high desk. She had a sexy librarian look with cat-eyed glasses and very red lipstick. Her neatly secured auburn hair reminded Eden of Rosemary.

“May I help you?” she asked, perfect eyebrows lifted in question.

The woman smiled. “One does not merely see Frenchie, but she told me you’d be stopping by tonight. A prospect for ensemble, huh?” The woman’s eyes moved over Eden in an assessing way. Eden staunched her need to wipe her hands on her jeans. “Follow me. I don’t have a table free, but the stools at the bar provide great viewing. You’re in luck because Sista Shayla is about to go on.”

Eden had no clue who Sista Shayla was, but she delivered a smile. “Awesome.”

Redhead pressed a button. “I’m Marla, by the way. I’m one of the hostesses with the mostesses.” A panel slid open, and a fusion of jazz and hip-hop music welcomed Eden to Gatsby’s.

Eden wasn’t sure what she’d expected, but it hadn’t been what was revealed to her through the entrance.

The room seemed to be divided into three sections with an ornate rococo-style bar on either side of a huge warehouse space. Round tabletops with ivory tablecloths and flickering candles dominated the main part of the room, and a large dance floor stretched before the seating area all the way to a huge stage. An orchestra pit with a horn section sat on one side of the stage and a platform with a Fazioli grand piano on the adjoining. The honeycomb tile continued into the space, and a gargantuan chandelier hung from a rough-hewn wooden beam. It was as if Glenn Dorsey had a baby with a hipster. Art Deco, midcentury modern, and French Regency exploded and somehow looked . . . perfect.

“I know, right?” Marla said with a ghost of a smile. “It’s the usual reaction.”

A dying friend’s gift delivers a chance to start over…

With Morning Glory in her rearview mirror, Eden Voorhees heads to New Orleans to pursue the dream she put on hold while caring for her disabled mother. But in the Big Easy, she finds a roach-infested apartment, a non-existent job and a dwindling bank account. Refusing to slink home and admit defeat, she accepts a part-time caregiver position to keep her theatre dreams alive.

Nick Zeringue juggles his restaurant empire with the demands of a special needs daughter. Devastated after his wife leaves him, he throws his energies into making his growing restaurants the best the nation. When his daughter’s nanny quits, he replaces her with the quiet and alluring Eden. Attraction sizzles between them, but Nick won’t risk another broken heart for someone who may not stick around.

Eden has a plan for her life and it doesn’t include a man…at least not yet. Then her hidden identity as cabaret singer Lulu LaRue drops her (literally) into her boss’s lap, making her rethink what she’s always wanted. And when the chance to be on Broadway tap dances her way, Eden must decide – does she want love or fame?

Fall in love with Bourbon Street, a thrilling speakeasy…and Eden’s chance for happily ever after.

For more information and to sign up for my newsletter, visit www.liztalleybooks.com