When his younger brother loses interest in online dating, hot bearded bartender Joe Collins only intends to log into his account and shut it down. Until he reads about her.

Alex Parks is funny, fascinating, and pretty much everything he’s been looking for in a woman—except that she lives across the country. Soon they’re emailing up a storm and telling each other their deepest, darkest secrets…except the one that really matters.

When Alex pays Joe a surprise visit, however, they both discover that when it comes to love, it’s always better with a twist.

Confession time. I found Kylie Scott through Joanna Wylde. They have this weird “you’re the satan incarnate, but I love you, you’re my best friend” relationship that is entertaining in a way watching a drunk guy fall all over the place trying to find his wallet is entertaining. Which is to say, funny in a way you’re not sure if you’re a bad person or not, funny. And I haven’t read Dirty yet. I know…! I have it on my Kindle, I just never got around to reading it. So when I got the opportunity to review Twist, I took it.

For me, there were a lot of cliches – guy pretends to be someone he’s not; girl gets so sick guy has to take care of her thereby earning girl’s gratitude; girl sticks around because there’s just something about the guy; guy’s, fake-as-Haris-Pilton’s-tan, ex that everyone loves shows up; girl takes off without a word.

And yet, oddly it worked. It shouldn’t have. I should not have been rooting for these two people, but I think what made this story work was Joe. He came across as this lovable, kind of goofy, people-pleaser guy who just wants to be happy with someone. And I wanted him to get his happy ever after. He’s truly a character I rooted for. Alex wasn’t unlikeable, but I can’t say I had the same strong empathy for her that I had for Joe. After she got better, even though Joe took care of her, I had a hard time figuring out why she stuck around – why she didn’t go back to her regular life. I got that she was just as unhappy with her life as Joe, but her excuses seemed kind of flimsy. I guess I just wanted something more from her that would make me think “yeah…I totally get it”.

All in all, I did like this book and I’m looking forward to the next book in the series. 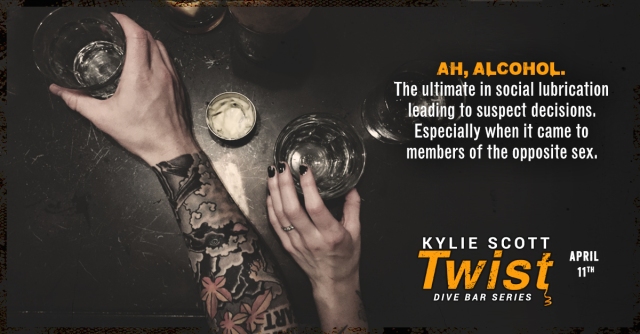 I wanted to talk to you a bit more about what happened between us online,” he said, his mouth a serious straight line. “How I came to use my brother’s profile.”

Ugh. “I’m pretty sure I found out everything I needed to know last night.”

“Once is a mistake.” I crossed my legs, kicking my black leather bootie back and forth. So I was a little aggravated. Sue me. “Months’ worth of e-mails is not. You could have introduced yourself to me, Joe, told me who you really were. You chose not to. Christ, no wonder you kept putting off meeting. I should have known something was wrong.”

“You’re right. I shouldn’t try to sell you excuses.” A big sigh from my “friend.” “Truth is, I’m not used to being the bad guy. Usually I’m the one cleaning up my brother’s messes.”

Kylie is a New York Times and USA Today best-selling author. She was voted Australian Romance Writer of the year, 2013 & 2014, by the Australian Romance Writer’s Association and her books have been translated into eleven different languages. She is a long time fan of romance, rock music, and B-grade horror films. Based in Queensland, Australia with her two children and husband, she reads, writes and never dithers around on the internet. You can learn more about Kylie from http://www.kylie-scott.com/