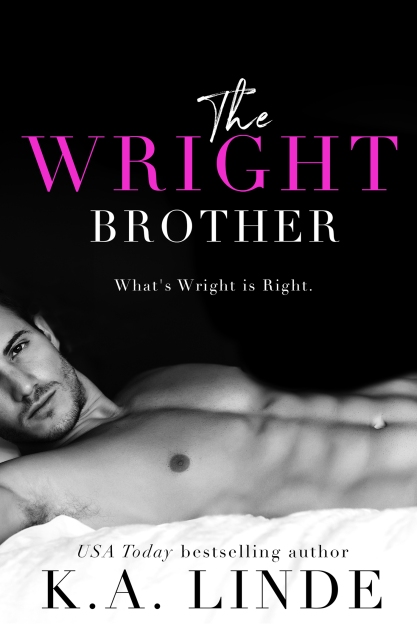 He didn’t remember and I wish I could forget.

I may have sworn off the Wright family a long time ago. But when I returned home, Jensen Wright crashed into my life with the confidence of a billionaire CEO and the sex appeal of a god. Even I couldn’t resist our charged chemistry, or the way he fit into my life like a missing puzzle piece.

Too bad he’d forgotten the one thing that could destroy us.

Because Jensen Wright doesn’t share. Not with anyone. And if his brother finds out, this could all go down in flames.

When it all was said and done, was he the Wright brother?

Let me say up front, I enjoyed The Wright Brother enough that I one-clicked The Wright Boss. That being said, it’s been a couple of days since I finished reading it and it didn’t stick with me. You know…the way those books that dig down deep into you and you can’t stop thinking about it, stick with you.

At times it felt like some of the conflict felt a bit contrived and could have been avoided with a good, long adult conversation. Both Jensen and Emery have their hang-ups, and while they’re valid (to a degree), I’m not sure they wasn’t enough angst for me. Maybe that’s why it didn’t stick with me – I knew eventually they’d have their talk and work things through.

But again, as I said at the beginning, I enjoyed it while I was reading it, enough to buy the next book in the series. I think this will be one of those books you tell your friend “yeah, it’s good”, but you don’t necessarily gush about. At least for me. K.A. Linde is the USA Today bestselling author of more than fifteen novels including the Avoiding series and the Record series. She has a Masters degree in political science from the University of Georgia, was the head campaign worker for the 2012 presidential campaign at the University of North Carolina at Chapel Hill, and served as the head coach of the Duke University dance team. She loves reading fantasy novels, geeking out over Star Wars, binge-watching Supernatural, and dancing in her spare time.

She currently lives in Lubbock, Texas, with her husband and two super adorable puppies.