Buy it now! For only 99¢
Amazon
Available for free on Kindle Unlimited
Add to your Goodreads TBR
Enter the Giveaway!
View the Trailer
Teaser Slideshow 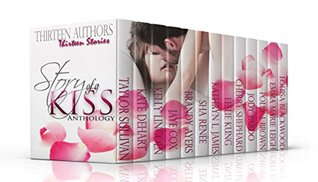 Anthologies can be a tricky thing. I usually pick them up because I’m a fan of one or two of the authors expecting to enjoy a few of the stories and maybe find a new author or two. There will be a few stories I really enjoy, but most of the stories I could take or leave.

Story of a Kiss is different. I enjoyed every single one of the stories.

All thirteen. Some I loved, some I liked, but I would recommend every single one.

Each author has a unique voice and each story is as different as the authors themselves. Yes, I have my favorites (no, I’m not going to tell you which ones), but there is truly not a bad story in the bunch. There is a story for everyone – first love, second chances, forbidden love, frustrating love, the promise of something more – everything you could want and more. Story of a Kiss delivers.

I know for a fact some of the authors are working on longer projects based on their short story in SOAK and I. Can’t. Wait!

There will be a thousand kisses in a lifetime but only a handful trapped forever in your heart. This Valentine’s day, join The Story of a Kiss anthology as we take you into the lives of thirteen couples. From a very first kiss of a high-school prom queen, to a kiss that travels the width of time. Kisses of redemption, heartache, discovery, and so much more.

Taylor Sullivan- Never Regret
At twenty-four, Margaret Andrews is still a virgin and sick of it. After a year on the top dating site in America, and a late night episode of HUNG on HBO, she’s decided to take matters into her own hands and hires a professional. 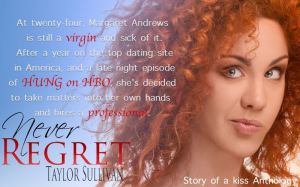 Kelly Lincoln- Maybe now
Maybe now I should kiss her.
The thought haunts fourteen-year-old Hunter whenever he is with his best friend, Ava. The second he makes his move, their moment is destroyed and Ava leaves town. Ten years later, she’s back, and so is the maybe now that Hunter thought was buried.

Kathryn L. James- Crazy Beautiful Kiss
Two years after Calista DeLuca and Colin Williams shared a sizzling kiss…the one she couldn’t forget and the one he didn’t remember, their paths cross again. Secrets unfold. Tears fall. Hearts open. He’s the only one who can fade her pain into non-existence, but is it enough? 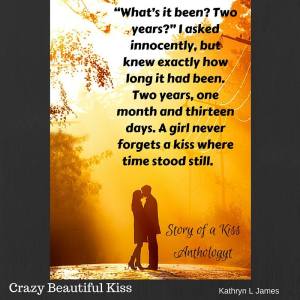 Sha Renée- Forbidden Kisses
Layla is enlisted in the Navy. Ethan is an officer. According to rules, personal relationships between officers and enlisted personnel are prohibited, but their desire is so strong, they can’t stand to be apart. Can military regulations separate lovers who are destined to be together?

Leslie Kung- At Long Last
Janny and Tom grew up together, but right before their friendship could turn into a budding romance, life and gravity pulled them apart. When the friends reconnected, their chemistry was undeniable–but tragedy put distance between them again. Sometimes it takes a lifetime to finally fall in love.

Emma Marie Leigh- Wrong time
Jo Stevens is an archaeology graduate student on the opportunity of a lifetime- an excavation in Pompeii. When her group discovers a basement, everything Jo knows is rocked. Rules are broken. Lines are crossed. Jo unearths everything she’s ever wanted. She’s just in the wrong time.

Louisa Blackwood-  Can’t Let Go
Josephine “Joe” Burke has been running from the past since the night her mother died, choosing solitude over dreams. She’s suddenly forced to return to her Tennessee hometown and to her old flame, Colton James. Joe can feel her defenses crumbling under his irritating charm, but with the past still haunting her future, can she open her heart to happiness again?

Polly J. Brown- Ever Be
Evangeline’s life revolved around the water until she nearly drowned. Now, she’s returned to the beach to confront her fears, and Gregory Owen, the super-bro who saved her life. Greg wants to help, but can she trust his intentions? Or worse, her own?

Jaye Cox- Love in Photographs
When her heart remembers but her head doesn’t, will one photograph change everything? Claire didn’t need her memories when everything within her knew she loved him.

Brandy Ayers- Fighting Faith
At nineteen, Faith spent one perfect, passion-filled summer in San Sebastian. But just when she thought she might have her happy ending, Jasper, the love of her life, shattered her heart. Now, ten years later, they’re forced together once more. Can she hold onto the last few remaining pieces of her heart?

Kate DeHart- Missed Kisses
Struggling with the recent death of her mother, Jess finds solace in her best friend Ben. Everything about them says they shouldn’t click. He’s the trendy guy with the damaged family; she’s the bookish introvert with a lonely heart. Years of sweet memories cause their feelings to grow, until he does the one thing that could tear them apart.

Jody Pardo- Left Swipe Chronicles
Roommates Liz and Michelle venture into the world of online dating. After a series of bad first dates, how many swipes will it take to find her Man of Steel?

Cherry Shephard- Precious
18 year old Precious Montgomery is a nobody, she’s never even had her first kiss . . .  but that’s about to change. When her best friend nominates her for prom queen, Precious has just one week to make over her image and beat the queen bee – Amber Delancey. Amber has everything Precious doesn’t: Confidence, sophistication and popularity. But a chance meeting with Amber’s boyfriend changes everything.
Now, Precious has to decide what’s more important; what she’s always wanted . . . or what she’s always had.
Can a crown . . . or a kiss, really dictate your self-worth?