Add to your TBR

Romance and self-discovery later in life, the FINDING ME series is a Tempest standalone spin off with a more experienced but familiar cast of characters.

Find Me. Remember Me. Keep Me.

A story about hard decisions, second chances and love when you least expect it!

Are you Mrs. Morris?” The driver, a heavily bearded man wearing a Quiet Mon Pub ball cap, peered at me through his wraparound sunglasses. In his late twenties or early thirties, he looked much younger than I had imagined a caretaker to be.

I nodded and moved toward the jeep.

“You ready to go?” He dipped his shaded gaze slowly, sliding it over me. “Or do you need some more time at the jewelry store so you can find a more expensive watch with bigger diamonds?”

“No, I’m ready.” I frowned at the snide comment that implied I was as status conscious and shallow as all those social-climbers I had such contempt for. It was an unkind and unwarranted remark. He didn’t really know me. How could he presume to after only one glance? Then again, I looked at myself every day in the mirror and hardly knew who I was anymore.

“You’re late,” he complained. “You’re lucky I decided to swing back by the dock one more time, especially since the ferry’s been in for over a half hour. Still I wouldn’t have wanted to miss that fancy dress and the sun reflecting off that flashy watch of yours. Get in.” He gestured with his chin toward the passenger side. Moving my bag to one arm, I grabbed the handle and yanked, but the door wouldn’t open.

“Probably used to your chauffeur opening the door for you, huh?” He raised his bearded chin and lifted his shaded eyes to the heavens as if petitioning the island gods for patience. “It usually works better if you unlock it first, fancy face. The power feature is broken. You’ll have to do it manually.” His voice was a low baritone, but the insinuation was as unpleasant as his lack of manners.

I blew the humidity dampened curls out of my eyes and did as he suggested. “Why even bother to lock it?” I grumbled once I was in the seat, twisting around to grab the seatbelt.

“Because hardly anyone ever sits there,” he answered absently, glancing in the side mirror. He scanned a quick look for traffic and then pulled away from the curb.

I can certainly understand why, I thought sarcastically as I settled into my seat. He meticulously steered the vehicle around the busy shopping area alongside the dock, and I took advantage of his distraction to look him over. He wasn’t bad. Well, at least from what I could see of his face underneath his untrimmed beard, thick mustache, and long layers of unkempt midnight black hair barely contained by the ball cap. He reminded me of Pierce Brosnan. Pierce Brosnan as James Bond, to be more specific. Well, if I wanted to get really technical about it, Pierce Brosnan as James Bond in to Die Another Day after he had been captured and tortured for fourteen months by the North Koreans without the benefit of a hairstylist or a razor.

In other words…quite possibly hot.

But who could tell what was lurking under all that scrunge?

Maybe instead of Pierce Brosnan, the guy was actually Steve Buschemi. I chanced a second look to be sure…and felt a delicious, rippling heat along my spine.

Definitely not Steve Buschemi under there. 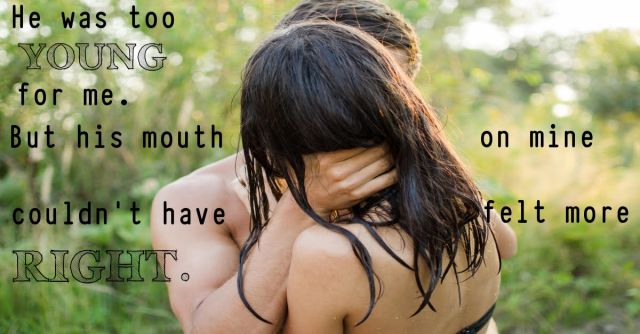 Almost forty-one-year-old Annabelle Morris, wife to multi-billionaire record label executive Charles Morris of Zenith Productions, and mother of two is at a crossroads in her life.

Separated from her husband after walking in on him having sex in the public restroom of a charity event she was hosting, she has arrived on the island of St. John alone and rejected, determined to re-evaluate her life and her marriage. She’s tired of being her husband’s showpiece while he pretends she doesn’t exist. She’s tired of trying to make their marriage work for the sake of their two teenage boys.

When she meets Johnny Lightning, a sexy but mysterious piano-playing, bearded sailor, she is tempted to break vows she has never before broken. But Johnny is much younger than her and seems to be hiding more than a few secrets of his own.

From the laid-back sandy beaches of the Caribbean to the elite circles of Dallas high society, Annabelle is forced to make critical choices.

Is a chance for happiness worth the risk of giving up the life she has always known?

Worth jeopardizing her own and possibly even her children’s future?

In the end, will she stay on her present course or brave a new and uncharted one?

Find Me, Remember Me, and Keep Me is a full and complete novel in three separate parts.

Love Evolution, Love Revolution, and Love Resolution are a BRUTAL STRENGTH centered trilogy, combining the plot underpinnings of Shakespeare with the drama, excitement, and indisputable sexiness of the rock ‘n roll industry.

Things take a bit of an edgier, once upon a time turn with the TEMPEST series. These pierced, tatted, and troubled Seattle rockers are young and on the cusp of making it big, but with serious obstacles to overcome that may prevent them from ever getting there.

Rock stars, myths, and legends collide with paranormal romance in a totally mesmerizing way in the MAGIC series.

Catch the perfect wave with irresistible surfers in the ROCK STARS, SURF AND SECOND CHANCES series.

Romance and self-discovery, the FINDING ME series is a Tempest spin off with a more experienced but familiar cast of characters.